Cannons (3)
The Predator is one of the two current Tier 4 choices that branch off of the Hunter at Level 45. The Predator can move the camera to seek other players in the direction the cursor is facing by clicking the right mouse button, or the Shift key. As it is a Tier 4 tank, it will not upgrade further.

It features a circle as its body and 3 Cannons in front, with the wider barrels overlapping the longer ones. Its current design is similar to the removed X Hunter.

Previously, it only added a trapezoidal base that covered the original Hunter’s cannons. The trapezoidal base was very similar to Ranger and Dominator, but wider to match the bigger barrel. 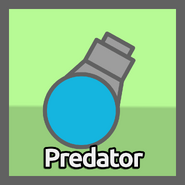 The Predator's appearance before it was merged with the X Hunter.

The message that appears once you upgrade to the Predator