Deployer (1)
The Rocketeer is one of the four current Tier 4 Upgrades from the Destroyer available at Level 45. It may not upgrade further.

A Rocketeer’s missile compared to a Tank’s.

A Rocketeer in Tag. 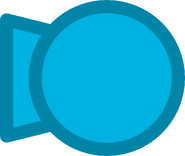 Transparent image of a missile.

A Rocketeer in Survival.
Add a photo to this gallery
Tanks (Diep.io)
Retrieved from "https://diepio.fandom.com/wiki/Rocketeer?oldid=475114"
Community content is available under CC-BY-SA unless otherwise noted.