Sandbox is a game mode added on September 3, 2016. It is similar in style to Free For All, except that the map starts out significantly smaller. Unlike other Game Modes, Sandbox includes cheats — players can change their Level and/or Class with the simple press of a button. This makes Sandbox useful for testing Builds and for finding/killing Bosses.

Additional players may join a Sandbox arena, through the use of a party link. Players who use cheats have their names displayed in yellow, and everyone else's remains white.

The entire map starts smaller than a large Pentagon Nest (around 50x50 tiles), but Crashers and Alpha Pentagons very rarely spawn at the center. As additional players join, the map size will increase by 20x20 tiles per player, increasing the size of the Pentagon Nest with it, along with the chance of Polygons (Alpha Pentagons and Crashers) spawning in it.

Much like with the size the Number of polygons available in the arena will increase by 12.5 polygons for every additional player. This number will then be rounded down to the nearest natural number. Polygons will respawn randomly 2 frames after one of them is destroyed.

(These keys are for the common QWERTY keyboard and normal settings. On other keyboards, the keys may be different.)

The Guardian spawning in sandbox

The text at the top says “God mode: ON”

The text at the top says “God mode: OFF”

A Fallen Overlord trying to kill someone in God Mode. 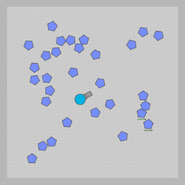 An Alpha Pentagon in sandbox mode

The Defender in Sandbox.