The Scoreboard, also called the Leaderboard, is a miscellaneous feature in Diep.io. It is located at the top right corner of the screen during the gameplay, the scoreboard does not display on the title screen. The scoreboard displays the top 10 players of Survival, Free For All, 2 Teams, and 4 Teams, the number of players on each team in Tag and the Health of the two Motherships of the now-defunct Mothership Game Mode. There is no leaderboard in Domination.

The score determines your position on the scoreboard and the Level of your tank. Your score and level are always indicated below in the center of your screen during the gameplay in the score bar, which also displays a bar (color depends on the team—default green) which shows your score compared to the top player. In Free For All, 2 Teams, and 4 Teams, your score will be indicated on the scoreboard if it’s high enough. When there are lower then 10 players in the server, like in Sandbox or Survival, the number of bars will be that number of players, say if there are 7 players alive in a Survival server, it will show the 7 players' score compared to the number one player.

To increase your score you have to destroy Polygons, other players or Bosses.

In Survival, the scoreboard works exactly like the Free For All scoreboard.

In the 2 and 4 Teams modes, the top 10 players are arranged from highest to lowest score, no matter what team they are on. The scoring system is the same as Free For All. However, instead of the bar being green, it will be blue and red for 2 teams, and blue, green, red, and purple for 4 teams, depending on what team the player is on.

Domination is the only game mode without a scoreboard.

In the removed Mothership game mode, the health of both Motherships was displayed and was arranged from highest to lowest HP. When both Motherships died, blue would always be shown first as blue was the first color added into the game.

In Sandbox, the scoreboard works exactly like the Free For All scoreboard.

In Maze, the scoreboard works exactly like the Free For All scoreboard.

Old Scoreboard, calculated with the number of kills 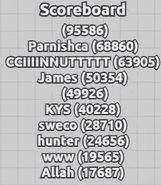 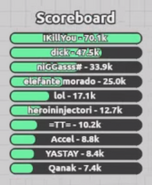 Third Free For All Scoreboard (no tank classes have been shown)

Current Free For All Scoreboard 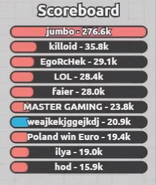 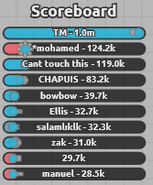 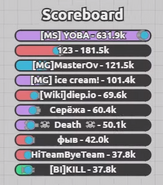 Old Mothership Scoreboard
Add a photo to this gallery
Retrieved from "https://diepio.fandom.com/wiki/Scoreboard?oldid=461046"
Community content is available under CC-BY-SA unless otherwise noted.