This article is for the original Diep.io Skimmer. For the Arras.io equivalent, see Arras:Skimmer.

For tank with a near-identical design to this tank, see Hunter.

The Skimmer is one of the current Tier 4 tank classes that can upgrade from the Destroyer at Level 45. The Skimmer may not upgrade any further as it is at the end of its tank line. The Skimmer was released on March 2, 2017.

The Skimmer has a circular body, and its Cannon looks like a shorter Destroyer cannon overlapping a Machine Gun cannon. 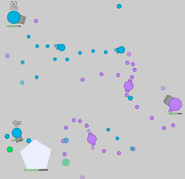 A Skimmer fighting a Rocketeer in 4 Teams gamemode nearby the Pentagon Nest.

A Skimmer fighting a Penta Shot in 2 Teams gamemode. 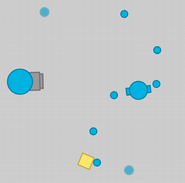 The Skimmer shooting its old missiles. 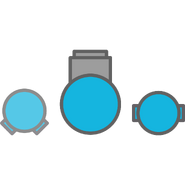 Skimmer’s ammunition design.
Was reworked during the December 23rd update in 2017.