This article is for the original Diep.io Sniper. For the Arras.io equivalent, see Arras:Sniper.

The Sniper is one of the five basic Upgrade choices from the Basic Tank and can be selected at Level 15. The Sniper can further upgrade into the Assassin, Overseer, Hunter, or Trapper, the most choices out of any Tier 2 tank.

The Sniper features a circular base with a rectangular Cannon on the front. Compared to its predecessor, the Basic Tank, the cannon length is slightly longer.

⬆
The Sniper has an increased field of vision and Bullet Speed; however, it has a reduced rate of fire. 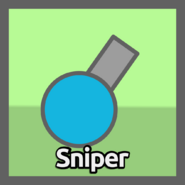 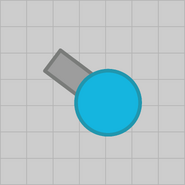