This article is for the original Diep.io Spike. For the Arras.io equivalent, see Arras:Spike.

The Spike is one of the three Upgrade choices from the Smasher, and can be selected at Level 45. The upgrade replaces the hexagonal base with 12 spikes surrounding the tank, and increases its base Body Damage by 40%.

The Spike has a similar design to the Smasher. It features a circular body surrounded by twelve black spikes which turn very quickly and are unique to the class.

—
The Spike, just like the Smasher, is a melee Class. It can’t upgrade the bullet stats since it doesn’t have a Barrel to shoot. As a Smasher-branched class, it can upgrade the Health Regen, Max Health, Body Damage and Movement Speed ten times instead of seven times. These Stats are not different from any other units of its Class, besides of the base Body Damage, which is slightly higher than of any other tank, making the Spike the most potent melee tank in the game. 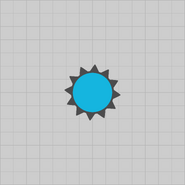 The Spike in-game with the old color scheme. 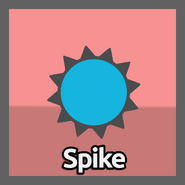