This article is for Stats in the original Diep.io. For the Arras.io equivalent, see Arras:Stats.

For examples of how Stats can enhance different tank classes for certain play styles, see Builds.

Stats are a core game mechanic in Diep.io. Along with customizing the class of a tank, players can also modify their tank’s Stats to master their own play style.

As the player levels up, they begin to earn Skill Points, which are used to upgrade stats. Skill Points can be spent either through clicking the + button next to a stat bar (shown at right) or by pressing the corresponding number key. Tanks gain 1 Skill Point for every Level until Level 28, after which one Skill Point is obtained at level 30, and then one Skill Point every three Levels until they reach Level 45. The maximum number of skill points is 33, and a stat can be upgraded 7 times before maxing it out fully (with exception to the Smasher branch - the maximum is 10 upgrades for each stat).

Note: Percentages and statistics on this page are merely approximate. These values are not 100% accurate. However, in many of the 8 stats, converting to 4 stat points or 7 stat points from 3 and 6, respectively, gives a higher overall buff in the respective stat.

Stats and their Effects

A study conducted in the Sandbox shows the results of upgrading the Health Regen stats a certain number of times. It is the amount of time taken for a Level 45 Basic Tank to fully restore its health after ramming into a Pentagon, no other stats considered.

Note: this chart only shows the amount of time to full health for a level 1 tank with 0 points into health. Use this chart for a reference to the proportion of change.

This chart shows the relationship between the regeneration points and the corresponding percentage of the restored durability to the total durability of a tank in the 30 seconds before the great increase of regeneration occurs.

Records show that having 9 or more points in regeneration allows regeneration to full health under the 30 seconds timespan, before the great increase in regeneration comes into play. The chart can be translated into this formula:
Durability Regen Per Second = 1/30 * Durability * (0.03 + 0.12 * Regen Stat)

This stat determines how much damage a Tank will inflict upon another object on collision. Body Damage will also lessen damage from other objects (see below, Damage Reduction). This is determined by how much damage it can give to the object, namely ammunitions’ health (penetration), so that it gets destroyed faster before reaching the maximum amount of collisions. Body Damage is increased by 50% when effecting Tanks.

At max Body Damage, a tank can kill a Pentagon by tapping it three times. Colliding at full speed will trigger all three impacts in the same instant. The base Body Damage was increased in the September 29th update.

Some tank builds use Body Damage as their primary method of attack. One Destroyer technique involves hurling their body at opponents using the recoil of their massive cannon. Fast-moving Tri-Angles and Boosters also use Body Damage to ram unarmored opponents.

A tank affected by spawn invincibility will deal with body damage as normal to enemies while taking no damage themself.

This stat determines the movement speed of the projectiles shot by tanks, and thus also increases how far they travel as the lifespan... Putting points into this stat increases the potential of surprising an opponent. Not only are they a sudden damage point on enemies, but they also may not even see it coming if maxed out. Increasing Bullet Speed makes bullets harder to dodge as well, and Destroyers with high Bullet Speed become extremely dangerous.

Bullet speed can slightly decrease the overall damage, as when a bullet is too fast it'll pass through a tank without providing all its potential damage. Turns into Drone Speed if you upgrade to an Overseer or any other Drone tank (except for the Factory).

Could be called Bullet Health. Each point put into Bullet Penetration increases its “health,” or how many objects a bullet can pass through before its health reaches 0. This includes Polygons, Tanks and other bullets. If it hits a large tank or shape and it has high penetration, the bullets will bounce off it. If bullets with equal Bullet Penetration hit each other, they both get destroyed. If a bullet hits another bullet with lower bullet penetration then the penetrating bullet has its life lowered and therefore it will pass through fewer objects. If a bullet hits a tank with high body damage, the bullet will deal less damage because the tank has lowered the bullet’s health to 0 before it can reach the maximum amount of collisions it can give.

This is a supplement to Bullet Damage, due to the fact the bullet has more health, which allows the bullet to do more damage.

Collisions with bullets will knock back the object hit and deflect the bullet in the process. If a tank with high health and Body Damage deflects a bullet (by being hit at the side) then the bullet only deals a specific amount of damage controlled by Bullet Damage, while a direct hit allows a bullet to damage the tank numerous times due to its high Bullet Penetration. Turns into Drone Health if the player upgrades to an Overseer or any other Drone tank (except for the Factory).

Bullet Damage determines how much damage a bullet will deal in a single collision. Each point in Bullet Damage increases this amount. If you upgrade your bullet damage with all 7 skill points that they can fit in, it deals four times more damage per hit than a bullet without bullet damage. When bullets from the same types of tanks (and some others) with equal penetration collide, the bullet with the higher Bullet Damage will destroy the other. The following chart shows damage per hit with a basic Tank.

It turns into Drone Damage if you upgrade to an Overseer or any other Drone tank.

Reload determines how fast a tank will fire bullets. The Basic Tank class has a base firing speed of 100 bullets per minute. Many class upgrades multiply this firing speed, while others reduce it.

A high firing rate increases a tank’s ability to hit strafing targets and increases its damage per second. Additionally, firing more Bullets increases recoil which can be used to propel certain classes of tanks.

For all Drone-based classes featuring Drone spawners, Reload affects the rate at which new drones are created. The Factory class gains extra utility from this stat, as it affects both Minion spawning rate and Minion firing rate.

For the Necromancer class, the Reload Speed stat changes to Drone Count, increasing the amount of Square Drones the tank can control.

This stat determines how fast a tank moves, not including recoil. Naturally, the more points put into this stat, the faster a tank will move. Low-level players can upgrade this stat early to get out of dangerous situations or outrun more powerful opponents. Lower level tanks are significantly smaller, so a level 8 tank with 7 movement speed moves even faster than other fast tanks like Boosters. However, Destroyers, Annihilators, and Hybrids might catch up with low-level tanks with high speed by using recoil.

Movement speed is passively lowered as your tank levels up, i.e. a Level 1 Tank is significantly faster than a Level 45 Tank.

This can increase the power of a Body Damage build covering more distance than the target will equal more collisions under a second which can mean the difference between a 1 hit or a 3 hit kill.

For Smashers, Spikes, Landmines, and Auto Smashers, there are 10 skill points available for Movement Speed.

Hidden Stats and Their Effects

Hidden stats are stats that can’t be upgraded directly from the bottom-left menu, but can also affect a tank’s ability and playstyle. Most of these can only increase/decrease by selecting different classes.

Bullet Accuracy determines how straight a Barrel fires out Bullets, while Bullet Spread refers to the angle that bullets are fired within. A high bullet spread has a high angle and vice versa.

For example, a Streamliner or a Ranger has much more Bullet Accuracy, or much less Bullet Spread, compared to a Sprayer or a Machine Gun.

Recoil is how far a Tank gets pushed backward when firing. While Recoil slows down a tank that is moving forward, towards its Ammunition, it can be used strategically or for a faster retreat. The tank with the highest Recoil per shot is the Annihilator (6.8 background squares per shot). On the other hand, some Snipers, Spread Shot and the Gunner have so little Recoil that it normally cannot be noticed.

All upgrades of the Flank Guard, with the exception of the Tri-Angle and Auto 3/Auto 5 branch, have their Cannons evenly distributed over the whole 360°, making each cannon cancel the Recoil of the other cannons out, and thus making the tank have no Recoil overall.

Examples of Recoil usage are:

Knockback resistance is the reduction of how far a Tank gets nudged from a collision, either with a Bullet/Drone/Trap/Base Drone or another tank’s body. This can only slightly increase as the Body Damage (by increasing the damage given to the other object) or Movement Speed (by moving faster) is increased, and otherwise cannot be changed by any type of Upgrade, except by the switching tank cheat (\) in the Sandbox Mode to play Motherships (100%), or by gaining control of a Dominator (which also have 100% resistance). This used to be able to increase by upgrading to the Smasher and then Mega Smasher, but it’s later nerfed, which caused the removal of the Mega Smasher.

Field of View, or Field of Vision (FoV for short), is how large a player’s camera is. The field of vision will slightly increase as a tank levels up while upgrading to Sniper and/or its upgrades can also increase the FoV by a large margin. As the FoV of a tank increase, more area will be visible from the camera of that tank, which results in everything seemly to have shrunk as the computer screen size is always consistent.

Compared to other tanks, the Sniper branch shows a strength in their wider FoV, allowing them to see further than other tanks can. (Stubs, please expand.)

Motherships of the removed Mothership game mode used to have the highest FoV due to its giant size, making it even larger than the Ranger’s, but is actually the same as most tanks when played in Sandbox, both at Level 45.

A list of classes ranked from largest FoV to smallest is as follows (excluding FOV affected by levels):

Damage Reduction is the reduction of damage an object experience on impact with a bullet/drone/trap/Base drone or another tank’s body. It is calculated from the Body Damage points of the object. 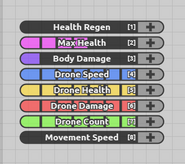 An example of stats of a Level 45 Necromancer. Note how stats related to bullets have been changed to instead benefit Drones.

An example of the Smasher stats, notice how much it can upgrade a stat compared to the normal ones. 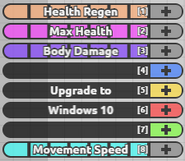 When Smasher was first released, the stats were way different then now’s stats. Notice the text on Bullet Penetration and Bullet Damage, this text says “Upgrade to Windows 10”.

Auto Smasher’s Stat table (notice how the stats are upgradable to 10.)