30,000
3,000
The Summoner is an AI-controlled Boss that behaves similarly to the Guardian and Fallen Overlord, but has a square body and summons weaker Necromancer Drones. Additionally, it has a similar color to the Arena Closers, as it’s color is yellow like the Arena Closers'. It was added on 19th August 2016. The Summoner has a chance to spawn 10-13 minutes after the start of a server, and 15-23 minutes after the previous Boss has been destroyed. The Summoner is the only square Boss that has ever been made in the game. It is similar to the Necromancer, only with its square shape, as it spawns Drones for itself like the Battleship. The Summoner doesn’t take a Square as one of its Drones if it bumps into it.

It features a yellow Square-shaped body about the size of a Dominator and four equally-spaced Spawners which spawn weaker Necromancer Drones. The whole entity appears to resemble a cross between the Necromancer and Overlord classes, but much larger.

The Summoner’s Drone Speed is a bit higher than an average Necromancer’s. Just like the Necromancer, its drones are square-shaped instead of triangles. The Drones spawn at a rate of 500 per minute, which can easily overwhelm nearby players. Each drone has 100 HP, so the Summoner has very similar firepower to a Machine Gun with maxed Reload, Bullet Damage, and Bullet Penetration. The drones behave in a way similar to the drones of the Fallen Overlord.

It has a health pool of 3,000 HP, although it regenerates health very slowly. This tank has four Spawners. Also, it has a greater reload rate than a maxed Overlord. However, this boss has a very low Movement Speed. It will regenerate all of its health if unharmed for 30 seconds.

Upon destruction, it awards 30,000 EXP. This will automatically raise a player to Level 45 upon killing it — if they have not reached that level already. It is highly advised to reach level 45 and to become a bullet spammer before fighting this boss, otherwise, the player risks dying.

Just like the Guardian and other non-Fallen Bosses, it is not targeted by the Base Drones in a team Game Mode unless it provokes them, and the Base itself does not affect it.

When it spawns, a gray notification above the player’s screen will state: “The Summoner has spawned!” 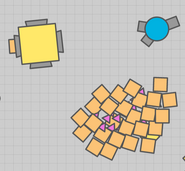 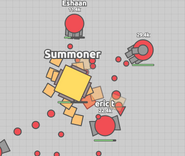 A team attacking the Summoner 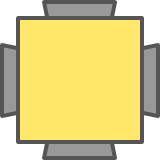 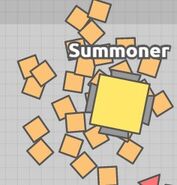 The drone “cloud” of a Summoner. 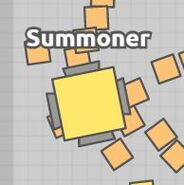 A Summoner in Sandbox.

A Summoner next to a Tank. (New Colors)

Closeup of Summoner without drones.