Survival is a Game Mode, added on February 15th, 2017. It is just like FFA, except that no players can spawn after the game starts and when players die they can't respawn. When players die, they will be redirected to another server. In this game mode, triple EXP will be given to the player. Also, players passively gain EXP. This means that the players will be able to get to Level 45 by doing nothing. However, this is not a good strategy, as other players will kill the player.

When first joining the game, the player will have to wait for others to join in. If there are at least 10 players, the game will start in 10 seconds. Other players can still join during this countdown. If there being fewer players than 10 during the countdown, the countdown will stop and the game will wait for the players again. When the countdown finishes, players will spawn in the arena and other players can't join anymore. The number of players determines the size of the arena. The more players in the game make the arena larger, fewer players make the arena smaller. When there is only one player left, Arena Closing will occur immediately.

Similar strategies to FFA can apply to Survival, since Survival is similar to it, with the exception that the player can't respawn. 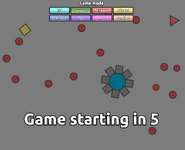 Waiting to begin the round.

When first entering the mode.

Changelog- as of 26th of Feb