This article is for the original Diep.io starter Tank. For the Arras.io equivalent, see Arras:Basic.

The Tank, usually called the Basic Tank, is the first variation of the tanks that the player can upgrade to once they spawn. It is equipped with one Cannon which shoots one Bullet at a time in a straight path, with slight recoil. At Level 1, with no upgrades, it has 50 HP.

At Level 15, four upgrade choices will be given to the player: Twin (adding an extra cannon next to the existent cannon, both larger than the starter Tank's) Sniper (turning the normal cannon into a sniper cannon), Machine Gun (turning the normal cannon into a machine gun cannon) and Flank Guard (once again adding an extra cannon on the size of the twin's, but this time adding it on the back of the tank and the existent cannon with the same size as before). At Level 30, the choice for the Smasher upgrade will be available. Level 30 and 45 will once again prompt the player with options of other “sub-categories” of tanks. For information on these other tanks, go to the Tiers page.

The Tank features a basic circular body with one light gray Cannon placed in the front of the tank. The body can be either blue or red (In 4 Teams and Tag, it can also be green or purple), depending on the tank’s team (In FFA and Maze, each player's tank is blue and all other (hostile) tanks are red.) 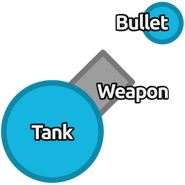 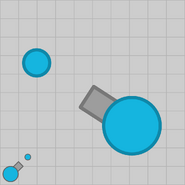