Team Deathmatch (often shortened to TDM or Team DM) refers to the two game modes 2 Teams and 4 Teams. The 2 Teams and 4 Teams game modes once were together as a single game mode known as Team DM, having some servers with 2 Teams and some with 4 Teams, but were later split into two separate game modes. Team DM sometimes also refers to Old School Team DM, the original version of Team DM that featured a layout similar to Domination, only without Dominators.

In all versions of this game mode, players work in teams rather than all fighting against each other as in FFA. These game modes have regular EXP gain.

The player either can spawn in either in the blue strip that takes up the left side of the arena, or the red strip that takes up the right side of the arena or a blue, red, green, or purple corner (they had no choice in which mode they wanted, forcing players to reload constantly to get the one they wanted — this is why the game mode was split). This determines their team, and they duke it out in the middle. Players of one team cannot shoot into the opposing team’s Base, as enemy bullets are instantly destroyed upon contact with it. Players also cannot enter the enemy team’s spawn area, as they will be instantly stopped and will begin taking rapid and high damage bursts against the invisible wall (refer to the Trivia section regarding why there is an invisible wall in addition to the visible border of the neutral map color and the spawn room).

The players are divided into two teams or four teams depending on the server, which are red and blue, the two additional teams in some servers are purple and green. Tanks of the same team can’t directly deal damage to each other, and they can ‘push’ each other without taking any body damage.

The spawn areas are defended by small triangles known as Base Drones. They are even smaller than Drones and Triangles and have an extremely large health pool. Also, they move quickly.

In 2-TDM mode, there are 15 groups of 2 Base Drones spread evenly across both the red and blue team’s Bases. Each group is circling its area, covering the entire base. In 4-TDM however, all 12 Base Drones are gathered together in the center of the 4 team's Bases.

The Base Drones will not leave their team’s zone unless an opponent is within proximity. They continue to seek the opponent they have focused on until they are defeated or travel a certain distance from the drone's base. Although there are other methods of evasion, the simplest is for the player to run away from the Base Drones until the latter condition is met.

Originally, Base Drones would never target bosses. However, after August 22nd, 2016, they will target Fallen Bosses.

Arena Closers only appear on this map if any one of the following requirements is met:

Team Deathmatch being selected in the title screen 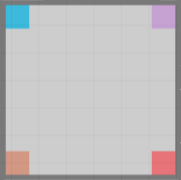 A 4-team map with brown color. It only lasted a few hours before brown was replaced by green.
Español Français Русский Tiếng Việt 中文
Community content is available under CC-BY-SA unless otherwise noted.
Advertisement