This article is for the original Diep.io Trapper. For the Arras.io equivalent, see Arras:Trapper.

The Trapper is one of the four Upgrade choices from the Sniper and can be selected at Level 30. The Trapper is able to further upgrade into the Tri-Trapper, Mega Trapper, Overtrapper, Auto Trapper and Gunner Trapper.

The Trapper features a circular base like almost every other tank. But instead of having normal Barrels, it has a Launcher that launches Traps.

The Traps it uses initially move at a fast speed from the Launcher and travel a short distance. Then the Traps quickly decelerate to a stop and will remain where they are, dealing damage to any enemy tanks and Polygons who touch them. Traps can be destroyed with enemy Bullets or enemy Body Damage, though touching them is not recommended due to their high damage. The Traps’ health is dependent on how high the player’s Bullet Penetration is. It’s important to note that the Traps can be pushed around by enemy Bullets. The traps are extremely strong. 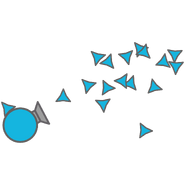 The Trapper laying down Traps. 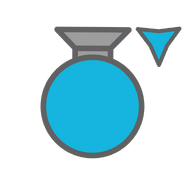