The Tri-Trapper is one of the five current Upgrade choices from the Trapper, which can be selected at Level 45. It cannot upgrade further.

The Tri-Trapper features a circular base with three evenly spaced out Launchers mounted on to it 120 degrees apart. The Tri-Trapper’s launchers are placed similarly to the Triple Twin’s twin cannons.

⬇⬇
Compared to the Trapper: 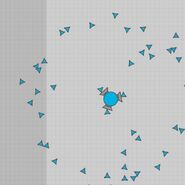 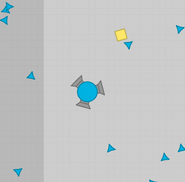 The Tri-Trapper’s new appearance.
Add a photo to this gallery
Tanks (Diep.io)
Retrieved from "https://diepio.fandom.com/wiki/Tri-Trapper?oldid=461070"
Community content is available under CC-BY-SA unless otherwise noted.