This article is for the Diep.io Twin Flank. For the Arras.io equivalent, see Double Twin.

The Twin Flank features a circular base with two sets of two rectangular cannons mounted on opposing sides of the tank.

Base Stats
(compared with Twin)

Base Stats
(compared with Flank Guard)

—
Upon upgrading from the Twin, it adds two cannons at the opposite side of the two other cannons. However, it decreases the Bullet Damage further. It has no recoil since the recoil from each of the cannons cancels each other out.

As the Twin Flank

The Twin Flank can be used to farm points by putting the Twin Flank’s 2 twins North-South or East-West and then moving side to side, or up and down, respectively.

Unlike the Quad Tank, the Twin Flank has a more concentrated point of fire on each side. Players can use this to defeat tanks with a widespread of Bullets (like the Octo Tank and Triple Shot) if the player has maximum bullet penetration. Also, because of its high fire concentration, it is a great farming tank, especially in the Pentagon Nest. Players aiming for Triple Twin or Battleship should choose this tank, as it allows them to farm and upgrades quickly.

Without putting points into Bullet Speed and putting a lot of points into Reload, Bullet Penetration, and Movement Speed, the player can run in the direction where the player's front cannon is pointed, and then fire. This allows the player to create a bullet wall which serves as both a strong offensive tool and a strong defensive tool.

Against the Twin Flank

Smashers are fairly good against a Twin Flank, as with their high movement speed, they can easily dodge the Twin Flank's bullets and slowly get closer to the Twin Flank, finally dropping in for the kill. 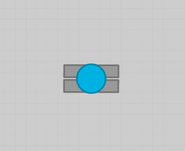