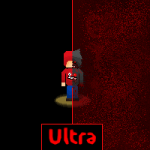 Heya, I'm Ultra. I'm one of the many editors on this wikia. I like adding strategies to tank pages. I am also a hardcore grammar nazi that burns bad english, so don't mess with me.

You may see me in Diep.io. I appear with the name of UltraReconKing, or [WK] Ultra R.K. I'm an eagle-eyed player with a shitty computer. I like to use either Trapper classes, or DPS builds, in gameplay. (Just let you know, I'm dangerous with a trapper class. Stay away.)

I also play other games, like Mutilate a Doll 2 for instance.

If you're wondering who made my profile picture, just know that it wasn't entirely me. I made the left side. The label and the right side was made by Graviatar from the Diep.io Conception Wikia.

Probably one of the most ridiculous games I've ever played.

I managed to get to 118K on this one with the Auto Gunner on 4 Teams. My strategy was to guard the Pentagon Nest from invaders while others farmed. It was crazy, trust me.

In this session, I haven't reached 100K, but I shared it nonetheless because the kills I got were crazy.

The only kills that I could remember are listed here:

I accidentally stumbled into a fight between a couple of tanks. I tried escaping and threatening them by shooting one of them, but then I killed one of them. He/she was a Twin, and whoever that person was helped me skyrocket to Level 35. Whoop

During a lot of farming in the Pentagon Nest, a Penta Shot entered, and I immediately assumed that he/she thought they could counter me. Thus, I attacked back, eventually cornering him/her to a corner and killing the insolent tank with everything I have. Whoop

After a few minutes of being crowned number one on the leaderboard, I was flooded with invaders. I tried to defend against all of them, but then that one tank snuck the final shots through my traps. That tank... fuc

Gunner Trapper, Free For All

This match was fucking amazing. I managed to retain first place for a good period of time. 124K

Alright, after rising to level 45, I immediately upgraded to Gunner Trapper, but then I encountered one of the top players on the leaderboard; a Hybrid with a DPS build. The Hybrid was at half health, so it was easier for me to kill it. I used my strategy, the Bunker, which involved attacking and retreating to and fro my traps. Soon, my gunner bullets killed the Hybrid, wiping out a champion as I ascended to 48K.

I encounter a Booster with a bullet build, and it decided to attack me. The booster was actually pretty smart, since it knew where my trap leaks were and shot through them. I was smarter, however. My new traps blocked most of the bullets, so dodging is irrelevant. I kept shooting the Booster as it ignored my bullets, and thus, dead. I skyrocketed to somewhere in the 70K's.

Pretty straightforward: stupid Twin engaged, I fought back, it died within a few seconds. Done. I went up to 96K.

I became king of the Pentagon Nest! I spread traps everywhere, farmed until I got up to 120K, and chased away anyone who got in.

The server was flooding with players. Soon, a Triplet, a Twin, and a Machine Gun was closing in on me, hoping to kill me. Well, the Machine Gun got me. Here's how:

The Triplet surprised me first. I wasn't prepared, so I had no traps. I was forced to turn my gunner barrels at it instead of my launcher. BIG MISTAKE: The Triplet ripped apart my puny gunner bullets and hit me, thus reducing me to below half health. But then I encountered the Twin, and "fuck", I thought, so I went southwest, and the Machine Gun was there. I went back to the Triplet, which was when I was reduced to critical health. The Twin then trapped me, and thus I struggled to defend against both forces. But when I thought I had both sides covered with traps, the Machine Gun came and fucked me up. rip.

I gained a staggering 200K with the Triple Twin. Amazing.

I got so many kills with the Triple Twin. I don't even know how I could kill that many players. The fun ended when I got surprised by a Necromancer. rip.

I helped many of my teammates level up before I died by reducing Alpha Pentagons to low health, and protecting my teammates while they farmed.

Got another 200K lol

I killed tons of players, quickscoped people, helped teammates farm, killed a Defender, and survived until exactly 200K. All as a Predator.

I'd like to say thanks to a person nicknamed 'QAQ' or 'QWQ', one or the other. I can't remember. They distracted the Defender as I hacked away with the Defender.

I also developed a new strategy I would call 'Quickscoping', which I will be talking about soon

UltraReconKing, or simply Ultra, is a Hero in DCoW Heroes. Ultra controls the types of Arcane and Spiritual, and like all normal heroes, has three superpowers. Ultra was made by Zathsu, and was edited slightly by UltraReconKing.

Ultra is a dark red circle, with a gray hood making a shadow over his face. The only features that show over his shadow is a slight smirk and his bright red, completely red, glowing eye. Behind Ultra would be a sword with a red blade and dark gray handle and crossguards. Ultra would also have dark red arms crossed in front of him. Around him would also feature a slight black aura.

Retrieved from "https://diepio.fandom.com/wiki/User:UltraReconKing?oldid=382214"
Community content is available under CC-BY-SA unless otherwise noted.